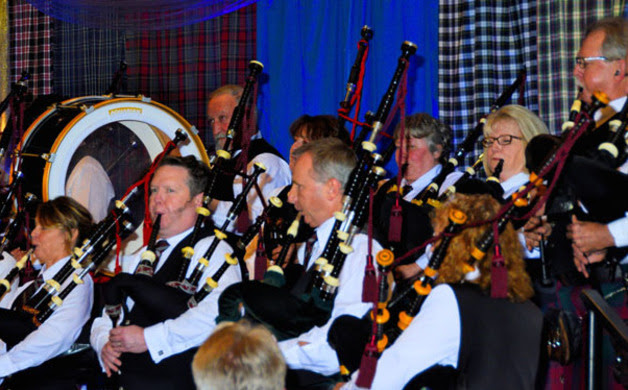 The Golden State has one of their finest joining us from across the pond this year on Sunday August 6th. Bridge of Allan Highland Games can confirm yet another international name added to the growing list of attendees. The Jefferson Pipe Band will be traveling 5,000 miles from California to sunny Scotland to compete at this years Highland games.

Late last year, members of a unique North State band made a vow. They committed to honing their talents with bagpipe and drums throughout 2016, and to taking these sharpened skills to the 2017 World Championships in Glasgow, Scotland. There, the Jefferson Pipe Band will face its ultimate challenge, according to Pipe Sergeant Carrie Wigham.

“They’re the best pipers in the world,” she says. “At first, we were planning on going to the Worlds in 2016. But we realized we hadn’t done a competition in four or five years. We said, if we’re really going to do this, we need to get together and start competing again.”

The name “Jefferson” comes from the geographic region over which the homes of the 20 or so members are scattered in Northern California and Southern Oregon.

Today, the Jefferson Pipe Band is well-known in Redding. It performs for numerous public events each year, ranging from holiday celebrations to fairs to fundraisers. They played two sets at the Reno Celtic Festival in October, taking a first and second place award. To prepare for Bridge of Allan & Glasgow, Skinner plans four or five competitions this year, culminating in a return to Reno.

To raise funds for the trip, Skinner set up a crowdfunding page at GoFundMe, and the band will organize its own benefits until the World Championships in mid-August 2017.