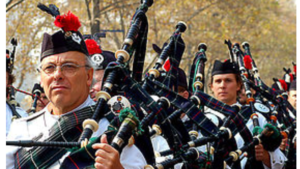 Traveling over 7500 miles to compete in Scotland, it will be a huge journey for them and a massive compliment to the Bridge of Allan Highland Games.

Some of the band members may also be entered into our Highland dancing competition.

In 1955 the first pipe band in the region of Argentina was formed (until then there had been several pipers who would occasionally play together for certain community events). This band was the result of the determination and hard work of Mr. Dunsmore Ross, a Scots and piper residing in Argentina. He was the band’s Pipe Major for many years and dedicated countless hours to teaching the instrument. He was helped by Mr. Jimmy Lees who organised and taught the drumming corps. Andrew’s Society of the River Plate, and for many years was the only one in South America.

In 1967 the South American Piping Association (S.A.P.A) pipe band was founded by Alistair Lean, who had left the St. Andrew’s band in 1964.

In 1982 a major group of the St Andrew’s Society Band decided to leave and form an independent band, since they believed it was the only way they could dedicate their efforts entirely to Scottish music and dancing, and specially to emulate the sound and format of traditional Scottish pipe bands. So, with this in mind, and thanks to the invaluable help and backing from Mr. Ralph Ayling ( a true mentor), the Highland Thistle Pipe Band was born. One of our main objectives was to continue with the tradition we had already created: performing excellence in an atmosphere of camaraderie where band members could feel they were part of a group of friends getting together to do what they like best – a hobby, so to speak. So the band, today, is 27 strong: 8 pipers, 3 side drummers, 2 tenor drummers, a bass drummer, a Drum Mayor and 12 dancers, all Argentines (correction, we have one Uruguayan). They wear kilts and plaids of the MacKenzie tartan in the Seaforth Highlanders sett. This was a tartan they had always wanted (even when in the St. Andrew’s Society) as it was the one that Mr. Ross used to wear.

We’re looking forward to hearing them play and wish them luck in all their competitions this year.

You can find out more about which cookies we are using or switch them off in settings.

This website uses cookies so that we can provide you with the best user experience possible. Cookie information is stored in your browser and performs functions such as recognising you when you return to our website and helping our team to understand which sections of the website you find most interesting and useful.

Strictly Necessary Cookie should be enabled at all times so that we can save your preferences for cookie settings.

If you disable this cookie, we will not be able to save your preferences. This means that every time you visit this website you will need to enable or disable cookies again.

This website uses Google Analytics to collect anonymous information such as the number of visitors to the site, and the most popular pages.

Please enable Strictly Necessary Cookies first so that we can save your preferences!