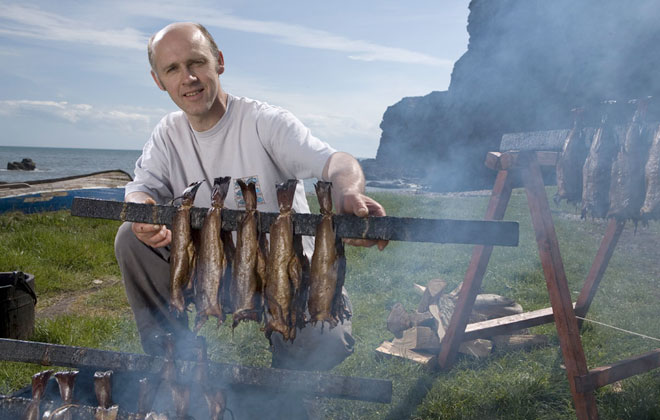 The kalaidoscope of sights and sounds is part of what makes a traditional highland games event such a captivating experience.  Now you can add mouthwatering smells to the sensations awaiting visitors to the 2014 Bridge of Allan Highland Games.

Arbroath Smokies are famed throughout Britian and beyond for their wonderful flavour and smooth, flaky texture.  For those new to this particular delicacy, smokies are smoked haddock, prepared according to highly traditional methods by a number of producers in and around the wee North East fishing community of Arbroath.  Historians among you may know that the Declaration of Arbroath (1320) played a key part in securing international recognition of Scotland’s independence, following King Robert the Bruce’s great victory at the Battle of Bannockburn, near Stirling, 700 years ago this year.

Back to the smokies.  Among all the Arbroath ‘smokers’, Iain R Spink has an enviable reputation for the very best quality produce.  Now a fifth generation family business, Iain has been invloved in smoking fish from the age of 16 and says he still harbours a tremendous passion for the craft to this day, when he heads a thriving business.

With people becoming more and more conscious of knowing the provenance of our food, what better way to eat than fish caught off Scotland’s east coast, lovingly smoked within a few miles of the landing port then brought to you in the wonderful atmosphere of Bridge of Allan Highland Games.  Another good reason to pen Sunday, 3rd August in your summer diary!

Find out more about Iain and the traditional art of the Arbroath Smokie at the fascinating Iain R Spink website.